Went up the old trail through the alders to see if I could spot Spring advancing.  Had a look through the camera lens at the same spot on the trail, hoping to see something different.  If anything, it all looked more drab than before (see March 9th blog)…sigh. B-o-r-i-n-g. 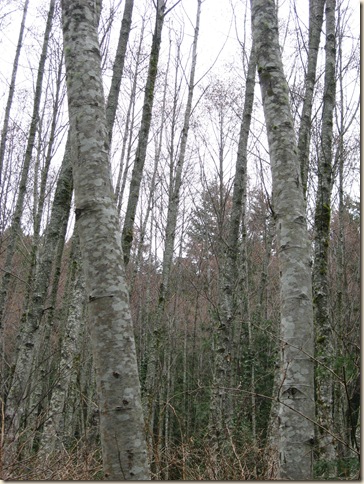 The color was gone from the sky and so too from the tree buds.  Not a green leaf in sight.
But just a bit further along I had to stop in my tracks and try to capture this… the huckleberries are putting out their delicate fingers,  getting ready to burst out in dainty leaf.  Every year they ‘duke it out’ with the salmonberries.  This year they’re winning. 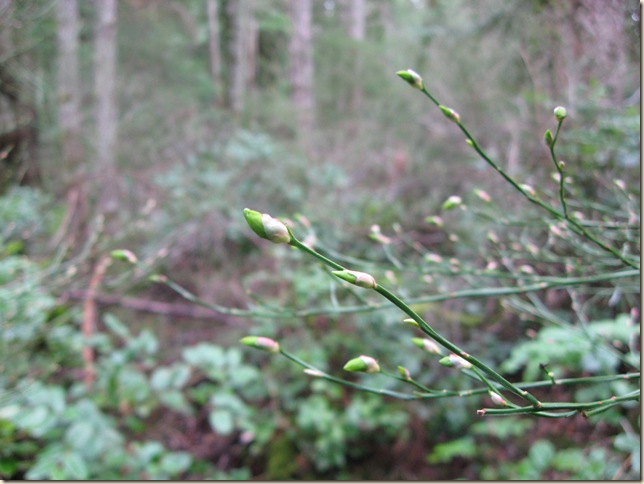 And then one day the wood will be transformed to green, underfoot and above.  The bleeding hearts will be dangling their beauty in every protected nook.  Ferns will be fabulous.  And all manner of nameless ‘growth’ will be sporting its freshest green.  But this year we may miss it.  For we have decided to go find the Sun and the warm weather rather than wait for it to come to us!

Early next week we’re heading down the California coast and across the desert to see our old homeland–Arizona.

I’m hoping to post a travel log here as we go.  So be on the lookout!  And if you should see a funny looking gray and white “Boler” trailer heading down the highway pulled by a regal old Crown Vic, be sure to wave!
Arizona here we come!

I didn’t get the chance to follow that trail to its end last time, as I had a car to return to. So today I jolted down to the sea by bike and picked up the trail from a different spot, following it on foot ‘backwards’ till I got to last time’s stopping spot.

Meanwhile sun and cloud played peek-a-boo. My world smelled of fir sap and cedar from fresh-cut logs
along the trail… 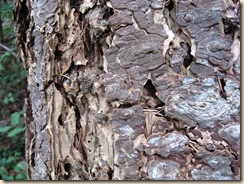 A stiff westerly ruffled the glinting ocean’s surface … and Louie and I had another delightful trek. 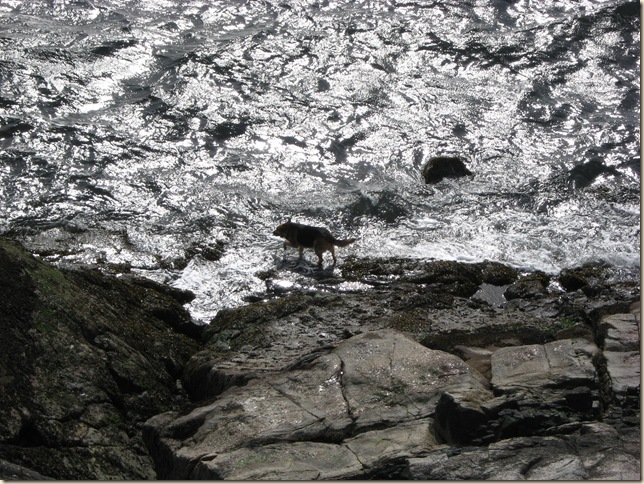 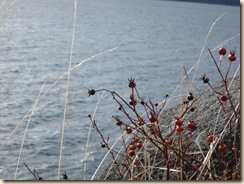 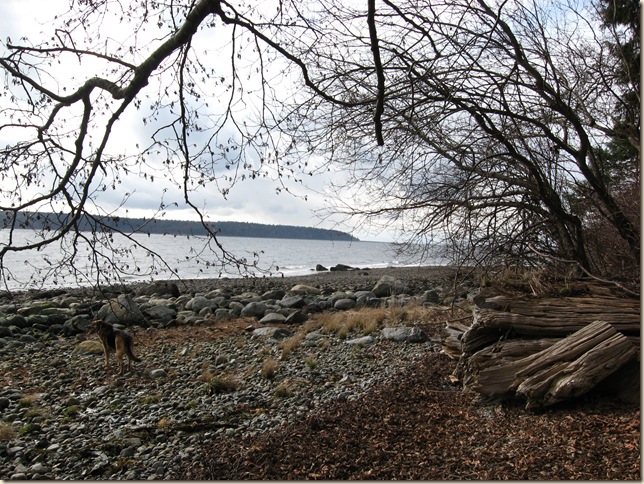 What a spot for a picnic. All that’s missing is the table–and the food! Next time I’ll bring company of the two-legged sort ( :

At this point it was time to turn back and the weather did the same. The sun vanished. The wind picked up. The ocean turned an angry gray and I heard faint pattering of drops. Long way to go, better hurry. No more pictures!

We got home only slightly wet, just ahead of the rain. Tired, chilled, and happy.

But Louie, well, he had found something aromatic to roll in along the way and had to have a bath out back, rain notwithstanding, before he was presentable. After that I really was chilled. So I had one too–but not with the garden hose!

Later, all warm and dry, I watched out the window as the sun slipping below the cloud cover to its setting 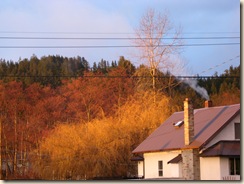 place in the West, cast a golden glow on the day’s close.

This is the view across the street. I love to watch the trees at this time of year. The willow turns yellow with its growing buds. The alders take on a red hue. And the evergreens supply the green backdrop. 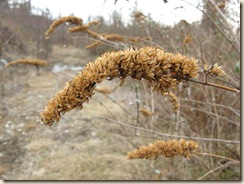 A little tired and short on enthusiasm last Friday, I chose the sea as my destination… To shorten the distance I drove to the head of the logging road that heads down toward the sea. Heading cross-country in the general direction of another known road, I hoped to make a quick hike of it…It wasn’t. The land separating me from the sea was once a poplar plantation. Having been cleared of trees, it is fast becoming a thicket, criss-crossed with 4-wheeler tracks and ruts and mud… I was not enthused when the track I chose took me on a detour in precisely the opposite direction I wished to be heading! This seed pod was a welcome bit of beauty on an otherwise dreary trek…

But at last, I hit the road to Gibson’s Beach and headed downhill to the sea.

It is always a refreshing sight. 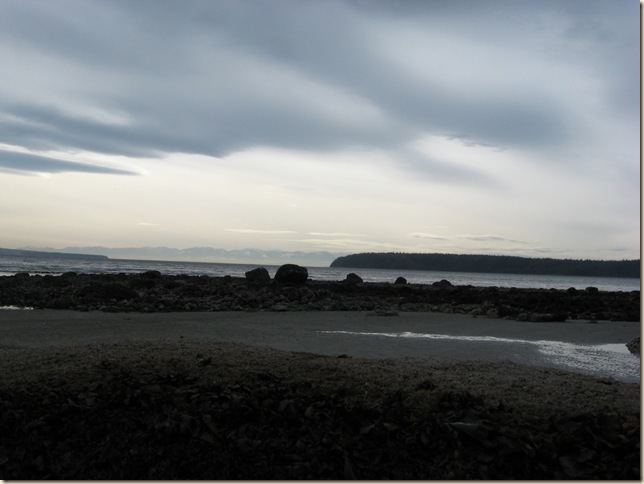 The tide was out and I had the beach all to myself, except for this heron… 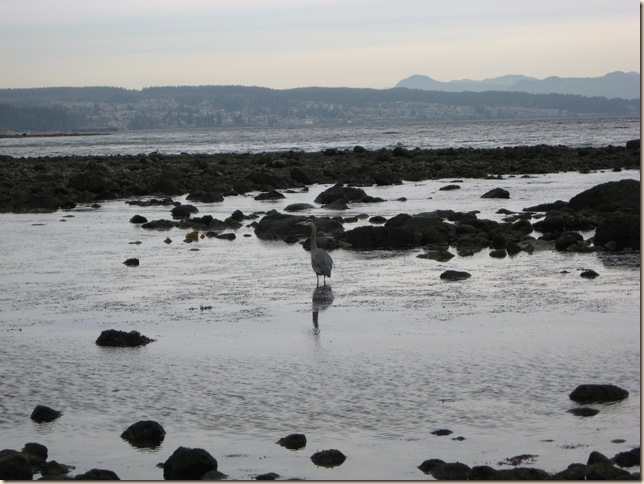 He was busy fishing and eyed my intrusion with suspicion, but stayed put in his pool while I wandered by… 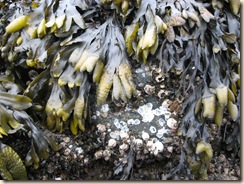 Looking for an alternate route home I espied a little trail heading into the bush, highlighted by this little wonder! 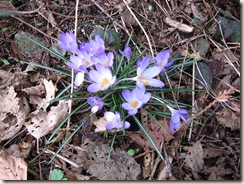 And what a treat I was in for– a freshly renovated trail running all along the seaside just inside the edge of the woods. Looked like it had just just been worked on. Fresh sawdust, bright little bridges, freshly cleared 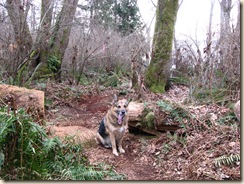 salal… I do love a new trail–so does Louie, note the happy eyes ( : 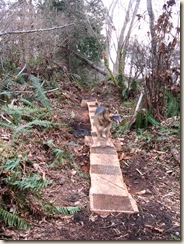 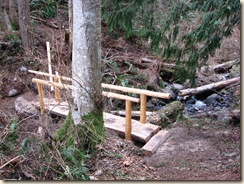 Suddenly the day was brighter and the walk not such a plodding affair–a fine reward for the effort of getting out on a lackluster day. You just never know where your feet may take you once you get them moving!

Try it and see!

“You have made known to me the path of life; you will fill me with joy in your presence, with eternal pleasures at your right hand.”
Ps. 16:11