As part of our summer’s end camping experience we chose a local hike for just the two of us—a trail up Old Goat Mountain to see a glacier up close.  Now honestly,  I don’t care much for glaciers.  They rather resemble old snow to me, dirty old snow, and I fail to feel the ‘Wow’ in them.  But I do like a good hike and going with Jim is a bit of a rarity so YES count me in!  And off we went.

The wending way through a quiet wood following a wee babbling brook was deceptively easy.

Tripping on roots was the biggest hazard.  No problem. 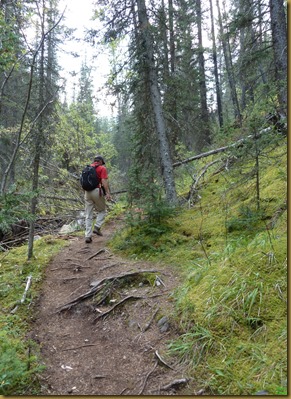 Then strangely the wooded path gave way to great tumbles of rough rock as though a giant dump truck had upended there.  Hmm… 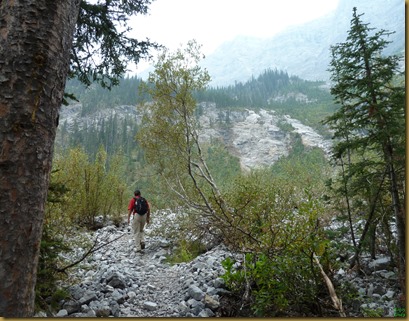 But the reality of where we were headed did not strike till we emerged from the quiet little poplar wood and found ourselves at the base of a rock-strewn mountain. 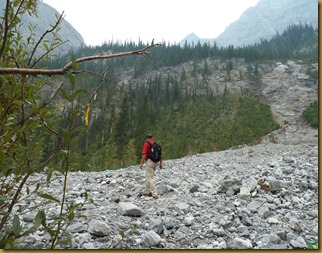 The only indication of the trail was the small band of brightly colored hikers descending from afar. 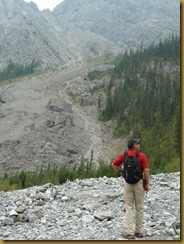 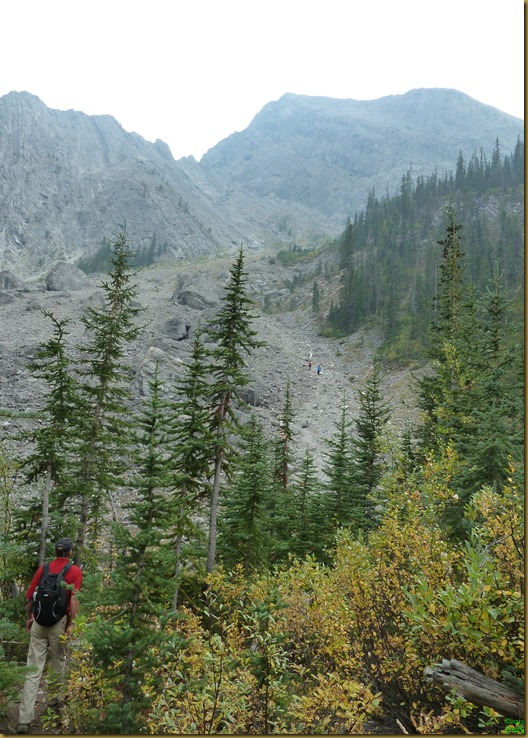 My mate kept his reservations to himself and encouraged us on. “It won’t be as bad as it looks.”  And we began the ascent as the wind picked up to remind us of the vast stretches of air at our backs, with nothing ahead but loose rock and steep terrain.

I have never professed to be or desired to be a mountain climber.  I don’t much like heights.  Turning around to look where you’ve been makes you almost lose your balance.  Knees turn to jelly.  Elevation leaves you winded.  There’s no place to go but up and all the while you quail at the thought of having to go D-O-W-N this slithery, scrabbly way.  Quite terrifying to a non-mountain goat.  I very nearly chose to sit it out and let Jim go on without me to find that elusive glacier. 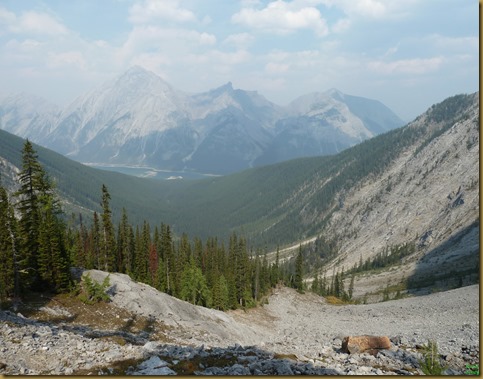 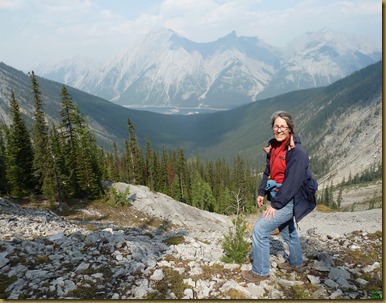 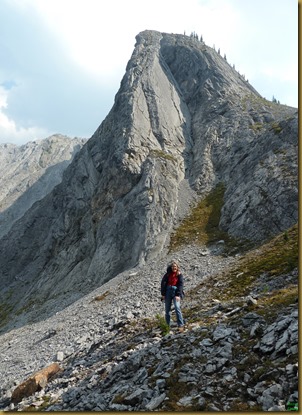 It suddenly made sense why the few hikers we met descending were doing so with hiking poles.  This idea had seemed funny when we’d seen them in the woods…  It was of some encouragement when we met a little family with a toddler on his daddy’s back and a little fellow at his side.  If he can do it… As we passed I realized this young ‘un was belted round with a stout leather strap the end of which was in his father’s strong hand. Ah.  Now that would be nice reassurance to have!  What happens if you fall up here and can’t walk anymore?!

But after a stop to breath (and stop hyperventilating), and with the encouraging remarks of descending hikers who declared the view well worth it, I decided to keep moving with Jim.  After all, he was the one with the bear spray and the treats! 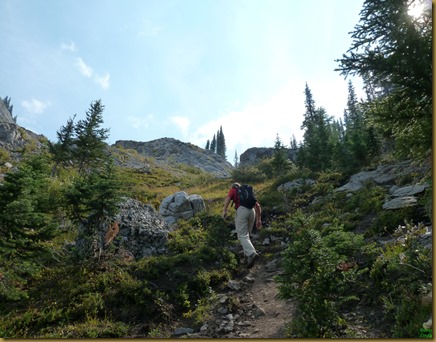 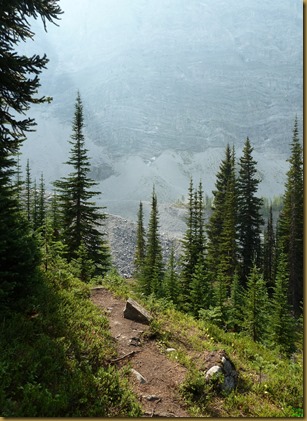 Pictures do little to tell this tale.  They don’t look nearly as precipitous or skittery as the climb felt.  But perhaps my smile tells all?

What a  relief when the trail leveled off and finally the glacier came into view in the distance. 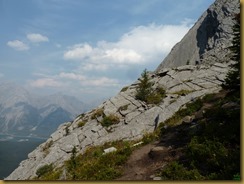 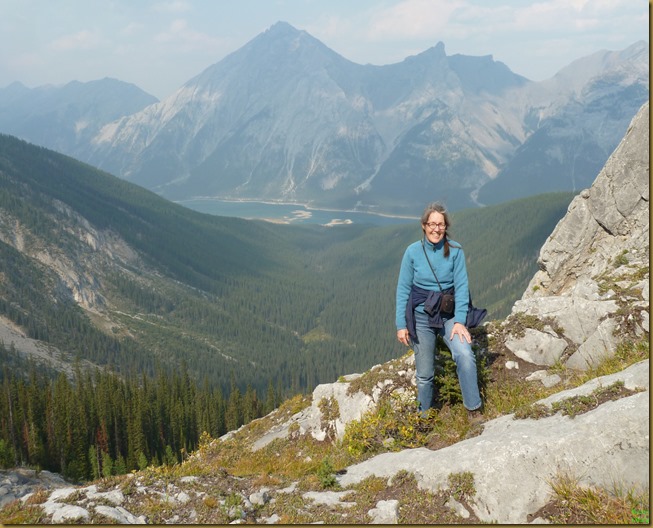 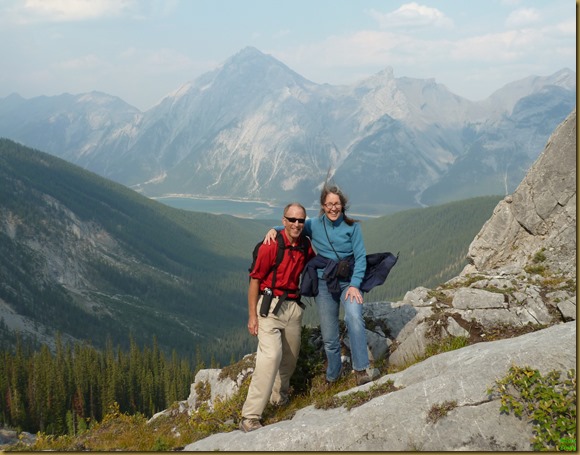 I was content to sit and munch a chocolate/peppermint energy bar and apply a couple band-aids for blister prevention while Jim went on to investigate the dirty snow more closely.  He took my camera along, leaving the bear spray just ‘case. 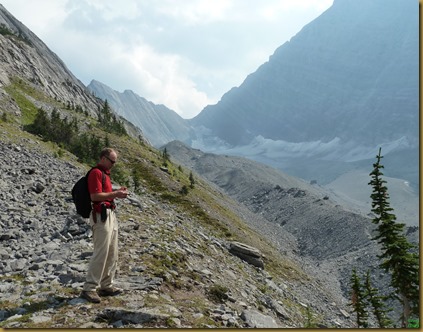 As I watched his red shirt recede into the distance along the gray rocky ridge an awesome and eerie silence descended.  The only noise, the distant muted clatter of the occasional rock tumbling down the great wall facing me…. 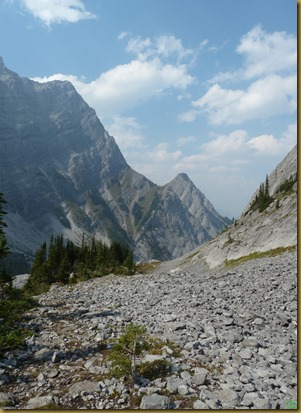 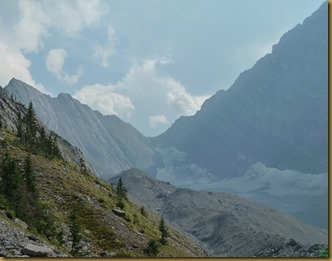 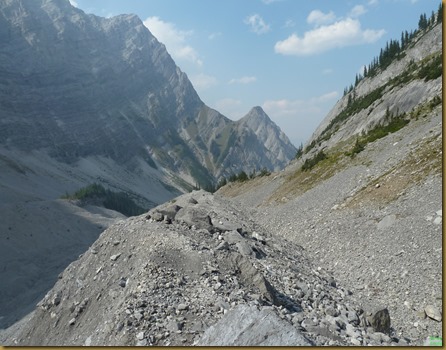 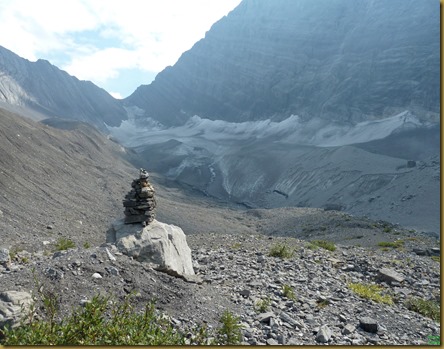 So we did it, we climbed Old Goat. 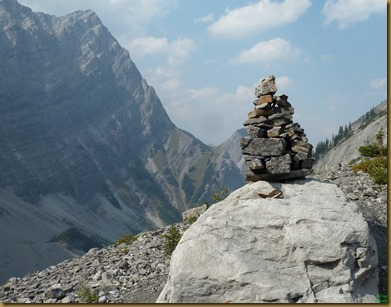 All that remained was to descend in one piece and return to camp footsore and glad to have lived to tell the story…It was a slow and steady creep, carefully, carefully stepping to avoid loose rocks and find stable footholds. 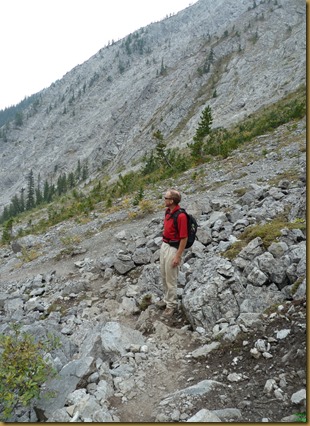 It was scary but not as dread-full as I’d imagined it to be. (Hmm… there’s a recurring life lesson here for me.)   But one thing’s for sure, I am no mountain goat! 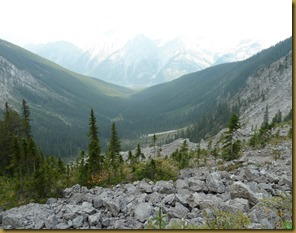 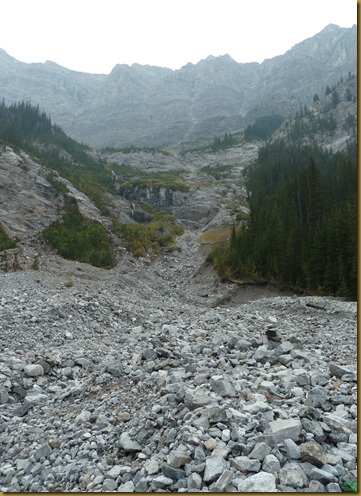 Who has measured the waters in the hollow of his hand and marked off the heavens with a span, enclosed the dust of the earth in a measure and weighed the mountains in scales and the hills in a balance? Is.40:12 ESV

Meanwhile, back home in my comfort zone, I sit at the window quietly fashioning little pine needle baskets… 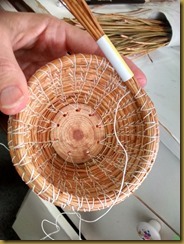 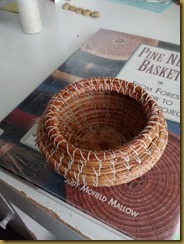 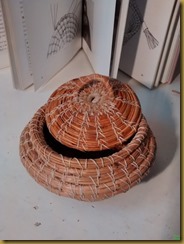 2 thoughts on “Not a Mountain Goat!”