Today the sun slept in.

Summer’s on its way out at last. But OH! what a gloriously warm one it has been.  We have never seen so much sun for so many weeks on end in our ten+ year history here.  So I can’t begrudge the bit of spitting rain that hurried me in my garden tasks today.

I dug the last potatoes. They’re not much to look at, but always a marvel to unearth.

I pulled out most of the tomato plants and gathered up the green ones to ripen indoors.

I urged on the happy yellow zucchini that is suddenly proliferating young ones now that the season is all but spent….

And then I came in and took stock of summer’s remains, smiling all the while with the delight that comes of growing things in one’s own garden… 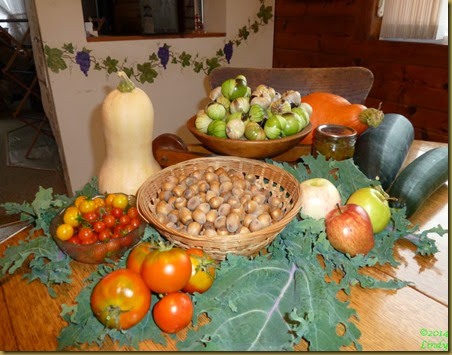 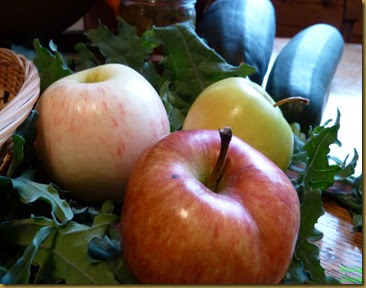 Most of the apples have been turned into applesauce already—a delicious cinnamon/brown sugar kind that smacks of apple pie.  We enjoy it on Sunday mornings on French Toast and then the leftover bit on Monday mornings in our Cream of Wheat.

But today I discovered  a pale gem of an apple on a little wild sapling that came up a few years back.  We didn’t expect much from it though the deer certainly made much of it this season.  But today I realized there were three apples left for me. And wonder of wonders they were the juiciest, crispest, sweetest apples of any we have grown.  No wonder they were such a hit with Bambi and friends.  We will definitely be paying more attention to that tree!  Any idea what kind of apple that pale one would be? 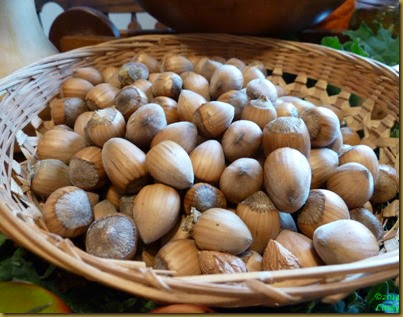 Not far off is the little scruffy hazelnut tree.  I planted it from a little sapling I picked up cheap at our local Seedy Saturday event…It’s had a rough go of it. The bears CRAVE protein at this time of year when they’ve had their fill of berries and apples and are ready for a long nap.  They pillage our little hazelnut predictably.  So I beat them to it this year and picked the nuts while still green.  They’ve ripened now and we shall have nuts for chocolate chip cookies! 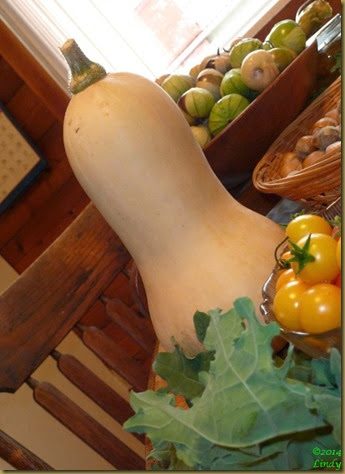 I grew my own Mr.Lunt (of Veggie Tales fame) this year for the first time.  We ate him shortly after the photo shoot, baked with brown sugar and apple slices. I thought it was yummy, though my opinion was not shared by all. It’s probably a good thing there was no Lunt family in the squash patch this year, just a pair of Lunts. 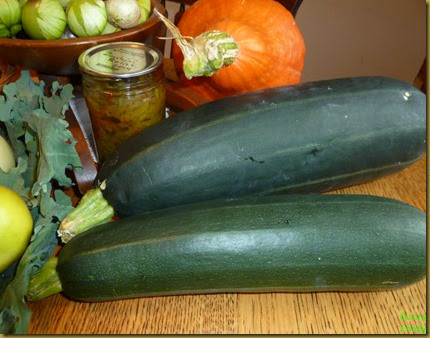 Well, the zucchini tide is ebbing now.  We’ve had a bumper crop to use in cakes and loaves and fritters and fried ‘Italian wonder’ and relish and…we still wonder if it has any nutritive value at all, or is it just great moist filler for everything?  We tried and loved a new recipe this year:  Double Chocolate Zucchini Bread.  Wow! 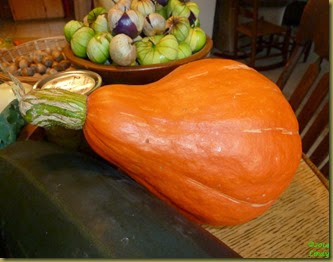 And this orange thing…well, it’s hard to say what it actually is.  Unlike pumpkins, it was orange from the start, and such a brilliant orange.  Shall we try eating it or not? 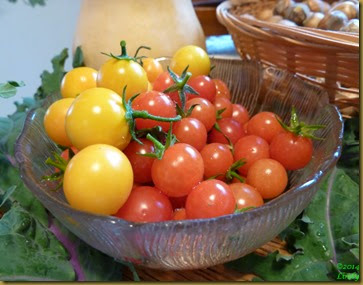 Tomatoes.  We’ve had them in all sizes on the table every day for weeks now. These tiny marble-sized ones I call “Mini Maries”. They are sweet and tangy at the same time and oh so prolific.  Good thing, because we tend to eat them by the handful. 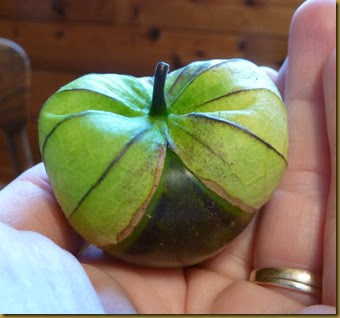 Have you grown these?  They’re tomatillos with a twist; these are a purple variety.  Tell me, does this mean I can’t make Salsa Verde with them? 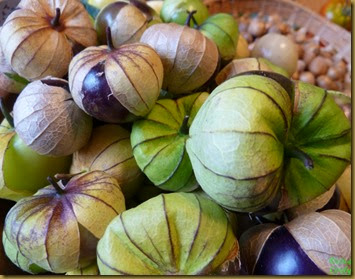 And that’s all for the produce parade today, except to mention the ubiquitous Kale.  It is everywhere in the garden thanks to its incredible ability to reseed itself. (And its knack for surviving the compost pile.)  We mostly ignore it but have been known to try kale chips and the occasional pot of steamed greens, though we prefer swiss chard. 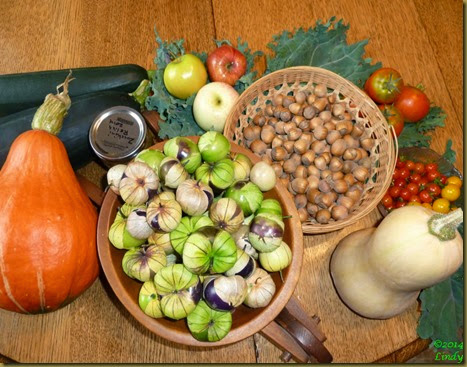 You crown the year with your bounty, and your carts overflow with abundance.
Ps.65:11